Halfway through the 2 week wait.. 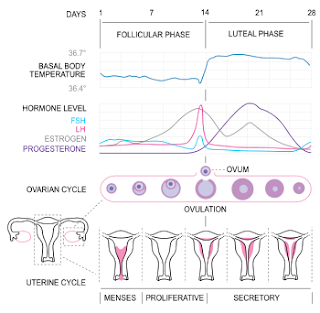 I've survived half the 2ww. The  flood of 'symptoms' the past few days have been helping. Crazy sore boobs, some creamy CM,  lower luteal phase temperatures than usual indicating that despite the high progesterone, there may be slightly more estrogen than usual around -- Here is an interesting and relevant tidbit: Estrogen has a temperature lowering effect, while progesterone increases it. So the so called 'implantation dip' that is a big part of 2ww urban legend comes from here- the drop in temps is because of a surge of estrogen around the time of implantation (and the middle of any normal luteal phase too, which is why non-pregnant cycles can show the 'implantation dip' too--see pic on right) - the question is, is that normally occurring surge higher than usual if there is an embryo bouncing around? Is your temperature even lower than normal because of that?

I've also had lots of twinges and cramping and have also had some really strong heartburn on 4 and 5 DPO (helped by some spicy thai food, which I can usually chow down without feeling a thing), and today (6DPO), I had mild nausea and twinges of hearburn. Heartburn is a promising symptom- that was how my mom knew she was knocked up with my brother, and I definately felt it, very early on, in pregnancy # 2.

The sad part is, I felt quite a bit of this (not the heartburn so much, and lesser cramping) during the last try which resulted in a BFN. As I had some very strong and unusual cramping around 9 DPO that cycle Its always possible that there was an embryo that stuck around till maybe the end (9-10 DPO) and failed to implant, but its plain speculation. As is most of this post.

Last time, in the BFN cycle,I had acupuncture before ovulation , but not around implantation (7DPO) as my acupuncturist had suggested. This time, I'm trying it in reverse, have an appointment for tomorrow. I have to say, I've been horribly indecisive about this. Last time, I did not try it because I had gotten pregnant in 2 natural cycles, sans acupuncture. After that last cycle failed I could not help but pointlessly wonder that maybe my uterus had turned more hostile and acupuncture might have helped. Now that I'm trying it, I'm nervous it will somehow hinder instead of help , which is unlikely based on everything, but this is so a damned if you do, damned if you don't frame of mind I'm in, ARGH.

I've been searching Pubmed- acupuncture has mostly been studied on the day of embryo transfer- that is in many cases equivalent to around 5 DPO for the embryo, so its harder to compare to when I plan to have it, which is 7DPO. AT this point it either mildly helps or has no effect.  There is a group from china who does this to rats (poor rats) and find that it reduces inflammatory cytokines, but comparing that study to humans is so totally apples and oranges.   Has anybody had it around this time-7DPO? If so, I hope you can share your experience!
Posted by Unknown at 6:06 AM

Email ThisBlogThis!Share to TwitterShare to FacebookShare to Pinterest
Labels: 2ww