I go away to Philly this weekend, where my old group of friends is experiencing a baby boom. 2 people got pregnant around the same time and are now close to the end of the first trimester. It still amazes me that when most people dodge this bullet pretty easily, I was slammed by it twice.

I still can't comprehend it and the why of it all would make for one rambling post or three.

Why did my first, apparently chromosomally normal baby die? Was it my anti-thyroid antibodies? My mom was probably positive for these when she had my youngest brother, and that was an easy, perfectly normal pregnancy. She developed over Hashimotos about 6-7 years later--- people are antibody positive for many years before thyroid function is deteriorates to the level that it starts producing clinical hypothyroidism.  Correction: we recently found out that while my mom has hypothyroidism, she does not have anti-thyroid antibodies. So the cause of her hypothyroidism is not autoimmune, it is not Hashimotos. So I in fact have a pregnancy-loss associated factor she did not have.

Who made the abnormal egg or sperm that made my second baby die? That is really a million dollar question that haunts me to this day---I know there will never be an answer, but that really stops nothing.

There are some things in life you thought you would have no problems with. I always thought baby making would one of these, just because I come from a family with amazingly good fertility, so much so that sometimes it can turn into a horror story. Despite every attempt available at that time for birth control, my grandma had 9 children and it exacerbated her diabetes and caused an untimely death at 55.   My aunt had 3 kids then decided to have her tubes tied. It worked as birth control for a few years, then , in a one in million case, something grew back, causing a tiny opening in the fallopian tubes, enough for a sperm to get in. She of course, got pregnant even with such odds, had an ectopic pregnancy that nobody diagnosed and nearly died, and it started a lifetime of medical problems resulting in a chronic pain syndrome. Sometimes, what is a boon for one person can turn into a curse for another.

So why me?I've got the same freaky good genes in this department (that I thank my stars for, and now, no longer take for granted), as far as getting pregnant goes.  Most REs categorically refuse to think there is anything wrong with me, that I need to get treated for. I get pregnant, all my tests check out, right now they are going with the 'shrug-your-shoulder' diagnosis to explain my losses. I've tried to hit them over the head with the PCOS, and they are like--- yeah, looks like you might have some presentation of it, but we would refuse to think that really of any detriment to you, because you ovulate and get pregnant easily.  Except my Indian RE, who immediately jumped on the PCOS diagnosis for me after just listening to my history of conception and loss. Interestingly, I did turn out to have that, and I hope he is right and metformin is all I need.

Anyway, there has been something I wanted to share for a while: Last year, after I started charting, I found my cycles fell into 2 clearly different patterns--- 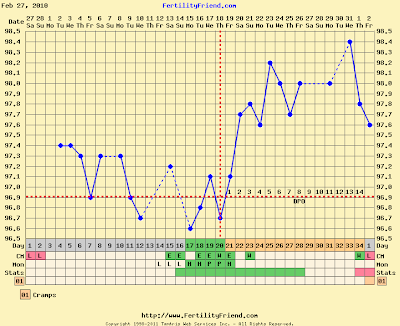 Pattern 2: Low temperatures (96.9 approx) on CD3,less evident egg white cervical mucus,  Surge starting afternoon of day 15, ovulation on day 16 and a shorter, 12 day luteal phase , though you can't see that in the picture below:) 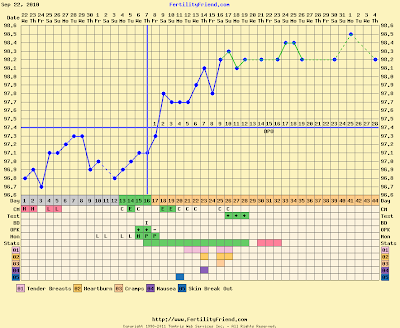 You could say that if progesterone (which determines length of luteal phase) and estrogen (which determines quality of quantity of cervical mucous) were indicators of egg quality,  this was my less stellar pattern.  Both my conceptions were in this cycle pattern. I had expressed concern to my doctors about this, and they pooh-poohed it.

Since my second loss (and subsequent increase in Vitamin D levels), my second short pattern with the day 16 ovulation has disappeared.  Last year, it was there for 3 out of the 6 cycles I had, and this year, in the 5 cycles I've had so far, it has not made its appearance even once.Undoubtedly, something has changed in my physiology to cause this effect-- I doubt it was the loss itself, simply because this pattern repeated after my first loss. The only other discernible change is vitamin D, a hormone that regulates a large number of processes in your body. Nonetheless, no matter what the cause, I find this change remarkable, we shall see if the trend continues.

My new, utterly unanswerable million dollar question (I have a lot of them): Was vitamin D deficiency contributing to my shorter, less pretty cycles, and possibly my losses?

I was talking to a friend the other day and I told her that one day in the future, I would look back at all of this and it might make sense, but it sure as hell does not now, from any standpoint.
Posted by Unknown at 8:43 PM