I've now entered that zone where time moves like molasses, and I'm far too preoccupied with the million dollar question: What is the Fate of this Pregnancy?

Although some my earlier posts sounded alarmist, for the most time, I was actually able to not obsess on this subject and life was fairly comfortable.But each ultrasound produces such upheaval.  Its literally like waiting for the Sword of Damocles to drop.

For the first 24 hours after the last one, it was awful, I could barely think of anything else. That night, I went out to a Broadway play (Newsies---review, its decent, not fabulous). This question was running in the background all the bloody way. I've done so many google queries on delayed growth, I'm now sick of the subject. The verdict is (drumroll please) it can go either way. DOH. Thank all of you who chimed in with stories. They really, really helped. I absolutely know that this can end well, its just that I also remain painfully aware of the alternate scenario.  But anyway, as predicted, I've calmed down now and am just going with the flow. Still time is moving by a bit too slowly. Should have a post on possible distractions. 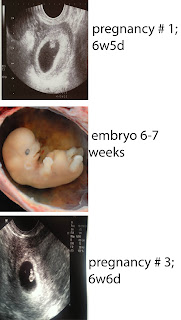 This pregnancy remains completely abstract to me. I cannot possibly bring myself even to put up the pregnancy countdown widget, and find out what is developing in my baby at this very minute. I dug up some photos of how an embryo is supposed to look at this point, and compared it to my 2nd ultrasound pic, which is sharply defined, and its slightly reassuring when I play the utterly pointless game of comparing it to pregnancy #1, which was chromosomal normal, but with rapidly slowing growth between week 6-8 and looked entirely formless at both ultrasounds (yes, I am nuts and this is entirely illogical and ultrasounds are effected by the angle implanted, yada yada, but whatever makes me sleep better at night, right?). Is'nt it also amazing how different each pregnancy looks? I have not found 2 ultrasounds on the internet that look the same,even at the very same point.

I occasionally talk to my uterus, doing my best to let this baby know how much I love him/her and how I'd give anything for him/her to be ok, and how there is a world of people waiting to take care of him or her, but  that is it. I am utterly unable to process the likely miraculous potential of what is happening in me at all. I guess its an innate defense mechanism.

There is a part of me that is sadly envious of anybody who can get excited about a beating heart. I never even got excited and squealy like most people get on seeing that heartbeat, it was more been more like, been here, seen that, what is the next part?? It is painful (and sad) to lose that joy, to instead obsess about this process from the perspective of how many bloody millimeters the fetal pole has grown, and where you will be 2 weeks later.  I hope that this with this round, I get the privilege of reclaiming that simple wonder somewhere along the way. I think it can come back partly with new milestones crossed, lets see if I get to cross any of them.

This pregnancy is different in another way, this time, I have a friend with me always. Next week, the person who has been coming with me (love ya, V) is out of town. Another friend (instrumental in shoring up my sanity through this process) is traveling from Philadelphia for the day, just to be there for me. Words fail me as to how amazing that gesture and this person is. I hope we get good news, for her sake as well as mine. People other than me are going to be genuinely hurt if this one does not work out. I don't even want to think about how this might hurt my family.

Anyway, if I don't post again (like I can hold out that long), the ultrasound will be next Thursday, when I'll be 8 weeks and 2 days along. I'm not going to my RE (since he can see me only in the mornings), but I found an OB, which works better for my friend who will get here by afternoon. This practice sounds fancy, I'm excited!

On a side note: I had people email me that they were having issues commenting to discus- If you have problems, could you let me know?  If its a widespread problem, I'll have to look into deleting it.
Posted by Unknown at 3:24 AM