It was most decidedly underwhelming, and not altogether reassuring, but nor was it a cause for alarm either. The gestational sac was visible, in the uterus, immediately and looked to be a decent size and was the prettiest part of the picture. It was really hard to see the fetal pole, but I definitely got glimpses of what could be the fetal pole as he kept moving the wand around, but it kept disappearing a second later. It was difficult to visualize because it was completely tucked into a corner of the gestational sac. 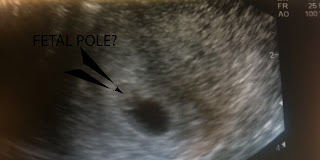 My heart stopped in the first few minutes, where we could not see the fetal pole. After we found it (he had to press down on my uterus to see anything), it was hard to see a heartbeat, I thought I could at times, but what do I know?  My RE said he saw a heartbeat too, but it was faint.  I asked him to do a CRL (difficult as we could barely see the thing) and it measured 6w1d, but the measurements were crude at best. The RE said he could see the yolk sac, but it was hardly the clear round thing of my previous pregnancy. The picture we got was god-awful. I don't have access to a scanner right now, but I took an iphone picture of the ultrasound.

I asked him if he thought things looked fine for this stage, and he said yes. He asked me to go back on Monday, which is what I will do.

I marvel at the change in myself. In the first ultrasounds in previous pregnancies (which were 2-3 days later in the 6th week), I saw better and more reassuring images, but I was still unsatisfied that things were not *perfect*, with the CRL lagging behind by like 2 days or something like that. Now, I just listened to the doctor, with a fetal pole I could barely see and a heartbeat that looked barely apparent, and left things to rest. I think the best way to describe me now is 'impassive'. The fate of this little one remains utterly unpredictable, and shrouded in fog, but que sera sera. I can get through this weekend, run around town with my cousin and have fun. That is the bottom line right now.  When I go back on Monday I have 2 people (my cousin and my friend) coming with me, can't ask for more.

I also spoke to my boss and told him I want to stop working by the middle of August. That conversation went surprisingly well. PIs (Primary Investigators, the nomenclature for professor at the head of a research lab in academia) can be unpredictable creatures, and there was a strong possibility that he would make life difficult for me after. But, so far, so good.
Posted by Unknown at 10:59 PM