I had my ultrasound yesterday morning (preceded by a hysterical 5 minutes in tears when the nurse suggested the doctor might *not* do an ultrasound with that visit. Yeah, I was kinda on the edge, especially yesterday). 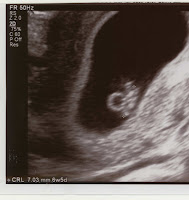 Anyway, here is Turbulence! And yes, UCSD has truly crappy u/s machines, Another reason to be waiting till the 12 week mark when I graduate to radiology with their fancier equipment.

The doctor tried measuring the heartbeat, but the machine did not allow it so he 'eyeballed' it to be around 130 bpm, up from 108. She has grown too, and has almost caught up to gestational age (6w6d).

And finally, there is the yolk sac, so utterly clear even on the poor resolution machine. I think any way you went in, with whatever machine, its just too bright to miss, so this is truly different from the last time. What the implications are I cannot guess.

I've been very guarded about this pregnancy, almost refusing to believe that this may be real and just adopting a wait and watch attitude, because everything was ALMOST this good with the last pregnancy. The doctors were just utterly confident that all would be well, nobody could conceive that anything could happen to a pregnancy that started out that strongly.

But this ultrasound has given me some real hope, because of many things, the quick catch up in the growth, the difference in the yolk sac appearance.  I'm now guardedly optimistic, which feels nice.

After my loss, I've tried to prepare for the worst case scenarios by never ever discounting that they might come about, but what is the point in that attitude? With my last pregnancy, until they showed beyond a doubt that my baby was dead, I had felt very little fear or apprehension, those 2.5 months preceding that awful moment were really happy. Even if fate kicked me in the teeth, I was really thankful to have had those days.

Now, its very nice to feel some hint of what I felt then, again. Joy should be snatched up wherever you find it, because god knows what will happen tomorrow.

Please keep Mo in your thoughts. She should have been posting her u/s picture too, the unfairness of life is mind boggling.
Posted by Unknown at 6:04 AM