Which is french for SHIT!! I was expecting my surge to start tomorrow morning. I've been monitoring for its arrival  like a KGB agent. I checked thrice yesterday, morning, afternoon and midnight, and this morning, where my test line was still lighter than my control line, and this just now. 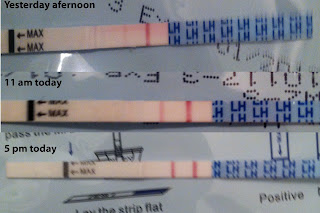 See to the right the results- the test line was lighter than the control line at 11 am this morning, but by 5 it had visibly darkened, being as dark as the control line.


This means my surge began this afternoon. I have not scheduled an IUI for tomorrow- I called in the evening, but everybody was gone. I'm with NYU fertility, I wonder what they do in situations like this.

Its also an irregular cycle for me, but is it bad irregular? Who the hell knows? I have had around 1 full day (atleast) of high estrogen before my surge began.  My CM has only been creamy till yesterday, but today it changed to eggwhite. I've definitely had better natural cycles, though this is not the worst either. If my surge had begun tomorrow I'd have had far fewer worries.

I'm probably going to go in tomorrow for an IUI (if they'll let me, given the late hour). Sigh. When I wanted to do this again, I wanted things to look extremely reassuring. They never seem to be, not when I actually want them to be. But its bloody hard to wait- I wish to god I had gone the last time things look good, last month. But when you hunker down and wait for that 'perfect' cycle to show, its like waiting for the kettle to boil, its not going to happen on your watch.

So the games may begin again- will update when PUPO, assuming they let me go tomorrow.
Posted by Unknown at 6:36 AM