On jinxes and attachment parenting

Every time I praise or discuss my daughter (Oooh her cheeks are getting  nice and chubby, Yikes she drank 38 oz of formula today, etc.), I literally have everybody jump down my throat, because apparently, Indian culture dictates that if you praise your baby or discuss a specific aspect of his/her progress, you will JINX WHATEVER IS POSITIVE. Apparently, praise/focus from us moms is the most deadly thing for a baby. Meh. My response, as you could imagine, was always an eyeroll.

But then, I came here and boasted about how well she was getting over her vaccine, and wham. Day 3 post-vaccination, my mostly Jekyll-esque baby was replaced by Hyde. She was uncharacteristically fractious, and wanted to be comforted/held all day. Two days in a row. The third day (yesterday) she seemed mostly back to normal, but now I am a little more respectful of the jinx than before. The scientific side of me says that it may have been a delayed reaction to the rotavirus vaccine which is a live vaccine, and one of its side effects is irritability...it only surprises me that it was delayed by three bloody whole days. Did any of you experience this (irritability, delayed or otherwise) after the rotavirus vaccine? How long did it last?

The day after Gauri was born, in my bleary haze, I downloaded my first (and only, I think) parenting book: The Baby Book, by Dr. Sears. It basically lay mostly unopened in my phone for a while: I did read the chapter on attachment parenting and went Oh crap, she is in the NICU so I cannot bond with her, she has no knowledge of me since I did not carry her, and I can't breastfeed. Thankfully at that point I was too exhausted to add one more thing to the list of things I worried about, and I was confident that I'd be able to bond with her eventually, BF or not. 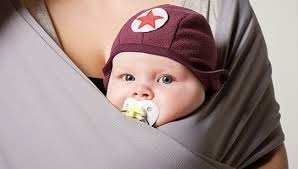 And indeed, even though I could not do many of those things, I still get to practice attachment parenting and I love the concept. Overall, I love how sensible that book is, though I have trouble believing that the "cry-it-out" style, if used in moderation, is deleterious. I love the fact that he tells you to parent how people have parented for millenia (including cosleeping, though you have to be uber careful/sensible in how you set things up), with no concept of a strict schedule for feeding or sleeping, no crying it out, and comforting your baby when they ask for it, no matter where he/she is on the "needs" spectrum. All of this seems sensible to me. Yet, I recognize and totally respect the fact parents the world over just do not have the bandwidth to parent like that, given the fact that there are only two (or only one) of them with jobs and limited help from others. Even if there are other people like grandparents, I've seen too many cases where interfamilial friction gets in the way. Fulltime attachment parenting in these circumstances would require herculean effort.

Gauri is low maintenance most of the while and plays by herself a lot, but occasionally requires extra cuddling and holding/attention. She mimics a "high needs" baby in that if you don't give her what she wants, she will open her mouth and make the concrete roof shake. Even her relatively limited requirements would have been difficult to fulfill had I been on my own in the States, exhausted from doing everything myself. In India, there is the concept of the joint family, where parents and grandparents and sometimes great grandparents live under the same roof. To be able to give her to multiple somebodies I trust is priceless. Living in a large family has multiple drawbacks and can lead to a lot of friction, but here is its one shiny, ginormous advantage. If your child is raised by the village, life is awesome  for everybody, most importantly the baby itself, and attachment parenting is possible. The situation now makes the past 1.5 years I spent in India with no life (no dating, an utterly staid social life, limited freedom, lots of nuisances) Totally.Worth.It.

As a side note, I was a little bummed that there was so little response by way of comments to my post on enhancing immune responses: parents, I request you to read and respond as to whether you do or do not do any of those things, and whether your pediatrician recommends any of those things, and if it has made any difference. I'm asking for this because I think an interactive dialogue would be useful.
Posted by Unknown at 8:19 PM 9 comments:

Tales of my gourmet barracuda, and post up on the other blog

The American Association of Pediatrics apparently has cutesy nicknames for different types of  nursing/feeding behaviors: After extrapolating this to bottle feeding, my darling appears to be a "barracuda." She is currently wolfing around 38-40 oz a day! The "gourmet" title is earned because she still turns up her nose at the milk if it gets too cold. But yeah, mostly "barracuda." I'm so proud. And also afraid, because if we delay bringing that bottle to her by even 3 minutes, she opens her mouth to unleash the hounds of hell on us, and sobs so robustly that her breath catches. Then, when we frantically shove that nipple in her mouth...immediate, blessed silence. It is like flipping a magical mute switch.

Overall, two months in, she is doing wonderfully. No spit up, no colic, great growth, focusing and interacting beautifully, utterly sweet smiles of which I am increasingly a recipient, pooping like a breast-fed baby, and sleeping 7-8 hours a night! I kid you not on the last one. For a  painful 4-5 days, she had decided that between 1 am and 6 am was the time to stay up, demand cuddling, poop a couple of times, and drink about 12 ounces of milk spread out over 3 bottles. Sleep deprivation was me...there were nights I was afraid I would literally fall asleep on her. I figured she had day-night confusion, and decided to try to expose her to really bright sunlight during the day and do whatever we could in our very limited capacity to keep her from sleeping too much....it may have worked, or she may have simply "drifted" into a new pattern, because her "cluster feeding" shifted to the period between 9 pm-12 am, and when she goes to sleep after tanking up on about 12-13 ounces of my goat milk formula, she sleeps around 7-8 hours. This pattern has been in play for about ten days now, and I would totally commit murder to keep it from going away. It is really interesting that after consuming 10 oz of formula, she actually gets super excited and frantic while consuming that last bottle: the "tanking up" instinct definitely seems neurological. This cluster feeding occurs only once during the day; the rest of the time, she takes 5 ounces every 3-4 hours.

She also had the first of the "scary" vaccinations, getting the rotavirus drops and the DTP shot on the same day. Unfortunately, when we went in the acellular verison of the DTP vaccine (which is less efficacious but has fewer side effects) was out of stock and we had to get the whole cell version, which causes a more severe reaction, generally. Her response to that was a very mild fever and induration/redness at the site of injection and general crankiness, but thankfully, her appetite never suffered and she was as alert as ever after, so I heaved a giant sigh of relief, and she was entirely back to normal within 36 hours.  In about 30-45 days, we will go in for the Hib and the pneumococcus shots, or I may split those up. As I had first stated, I wanted to delay these shots till she was a little older (till about 3-4 months), but the guilt/pressure (external as well as internal), even when you want to delay vaccinations just a little is immense. Each vaccine decision is a war: I refused to get her the BCG shot at birth, and gave it only after she crossed the one month mark. Ditto the polio drops. In India, the oral polio vaccine is given at birth, and in very, very rare instances, can cause polio in itself. I hence refused the drops and got her the shot instead at 6 weeks. I had to have arguments with so many people, and also myself just to get these small but significant delays; blargh.

Finally, I have the a blogpost up on the the other blog. I had mentioned that there are some easy ways to ensure that your infant/child's immune system is at its fighting best, and I've addressed that in this first blogpost.
Posted by Unknown at 2:37 PM 6 comments: