As the months go by, the desire to get back in the saddle is steadily getting stronger.  But its going to be oh so tricky, with timing. I need to figure out when I can wrap up my work here and return to India (for about 2 years or a bit longer). Though I know this will be somewhere between Feb 2012 and August 2012, the month is impossible to predict. As time passes and I become more and more eager to proceed, delaying TTC past December (the first month I could try) would require herculean restraint.

So I have two uncomfortable scenarios to contemplate- having to go through the first few months of pregnancy by myself (the anxiety with nobody to lean on/help distract me is not something I am looking forward to) , or  far, far worse, the prospect of going through a third loss by myself. My mom would fly out in that event, but still, the prospect of walking into another ultrasound, that awful uncertainty, with nobody to hold my hand is daunting.

I keep saying this, I have to learn equanimity.  No matter how long or how painful the road gets (especially then, actually), I have to believe that one day, I will have a child, and that is the child I was meant to have, and that everything that happened along the way before was because it was not yet time. For me, this is the only conceivable way to look into the abyss of failure and loss  and find some measure of peace.

In the meantime, I am procrastinating on a number of things
-scheduling a glucose tolerance test
-scheduling a HSG/sonogram
-Getting the swimmers shipped
-Scheduling a psychologist appointment, since I'm a single woman TTCing. This one I managed to argue my way out of in San Diego.  My new NY RE wants it done. If insurance will cover, I'll do it, but if not, I will work on persuading him to waive it- there is no bloody way I'm shelling out hundreds of dollars for a conversation where they just tell me things I already know.

This to-do list continues to taunt me on a subconscious level all the time, but with work being as busy as it is, every week goes by with me pushing it forward. And the taunting increases in crescendo in my head...
Posted by Unknown at 4:09 AM 14 comments:

I've told about 3 IRL friends (and my mom and my brother) about this blog. If you are not my friend M or my mom- stop reading or you will regret it.

So anyway, this post is about the symptom you mention in hushed tones while being forced to converse with your RE's office in a public place- breast tenderness.

In the past year, the only times I noticed I had breast tenderness was occasionally in my luteal phase, and of course, both the times I got pregnant, from about day 3 DPO. At this point, I have to remind my readers, my vitamin D levels, unbeknownst to me, were in the deficiency range- below 20 ng/ml.

In December, I found out I was deficient and started supplementation. I noticed this first in January, where my blood Vitamin D levels had just entered the normal range (around 35 ng/ml)- I had  breast tenderness well before ovulation.This thew me for a loop, who had ever heard of this?!?!

Anyway, it continued that entire cycle. Then, I increased my vitamin D dosage, from 4000 IU/day to 6000 IU/day.  My blood level increased to 60 ng/ml. A great many things changed (including the tenderness disappearing. All of these changes (which included decreased cervical mucous and delayed ovulation ) were collectively indicative of lower estrogen levels. Not liking the changes, I cut back my Vitamin D dosage, and within a month, everything went back to the way it was before I upped the dosage.

This is the second cycle with a lower blood level  (probably back to 30). And, predictably, when my blood levels of vitamin D are around this mark, the tenderness is back. It is pronounced. I have a cat who likes to walk all over me first thing in the morning- she steps on my chest, and oh my bloody god, my neighbors get to hear me screech.  The rest of the time, it feels like I have a couple of lead weights strapped to my chest. Not fun. I'm kind of nervous thinking about how bad it would get if I got knocked up again, if it is this bad now.

I cannot believe that I have this symptom, this strongly, well before ovulation. It has to be a refection of increased estrogen sensitivity- either my estrogen levels are up, or levels of estrogen receptors are up. Vitamin D can affect both these parameters, so its not entirely illogical that this is happening.

My question to anybody reading is- did you feel this as a symptom in the pre-ovulatory phase, with injectibles or while doing IVF, ie conditions designed to increase your estrogen levels? Just curious.

My visit to Philly brought the one thing I had successfully avoided thinking about for the past few months back to glaring center stage. Babies. The friends I stayed have a two year old, and she is a lovely child (also a genius-- she is spelling at 2!). More than anything,  I could not stop marveling at the utter trust and love that exists between parents and their children. It is the best of relationships. When you spend two days observing it, you get a wee bit wistful that despite having been pregnant twice, you don't have it yet, and far worse, there is the gnawing fear that something so wonderful might be forever denied to you.

As my mom tells me, I need patience. And, more importantly, I need to stop catastrophizing (if that is even a word). I cannot honestly imagine that after getting pregnant, that my baby will actually keep growing and that at some point, I won't have to stumble out of an ultrasound crying my eyes out. When that is all you know, its hard to imagine that an alternative exists, although, rationally, you know very well that it does.

I've completely lost the faith that I will actually have a baby someday, and its not going to come back until well,  maybe I cross the 5 month mark and the anatomical scan shows that all is well. God, the fear.  FDR did have it right when he said that the only thing we have to fear is fear itself, this terror and anxiety is bloody stupid.

I chart my cycles, and I now kind of beleive that when you are using natural cycles for conception, observing your fertility signs, which are very rough indicators of estrogen and progesterone (and by extension, egg quality) might be telling. For example, I hated the cycle I used for my second conception, I thought it was my worst ever. But I went ahead with it, though at that point, I compared it to a poker player going all in with a substandard hand.  And I ended up with a baby with an entire chromosome missing.  IF that error was in my egg, did it have anything to do with the possibly lower-than-my-average and definitely less-long peak estrogen levels in that cycle? No RE will even attempt to address this question, it is speculation beyond speculation. There is so little you know of this process, nobody knows what are the driving factors behind meiotic non-disjunction (where the chromosomes do not segregate correctly, causing numerical errors like trisomies or monosomies). Studies make it clear that estrogen has a role to play in this process, but correlating the estrogen levels, and moreover, the importance of time period of the estrogen peak, to the probability of meiotic non-disjunction is far beyond our ability to speculate, we simply have no clue.

Every now and then, you have a cycle where everything looks so good  you wish you could have used it to attempt conception.  The one that just ended was one such one. There were virtually rivers of the egg-white you-know-what (sorry for the icky detail). Then, my luteal phase, instead of being the usual 14 days, was a whopping 16. 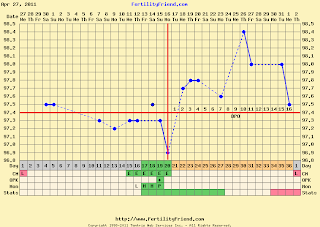 If I had not been sure that there was no way conception could have occurred, I would have been fairly nervous when it took over 16 days after day of ovulation for AF to show!  Whenever I conceive next, I hope it is in a cycle I feel this good about.