Sorry for being MIA.. 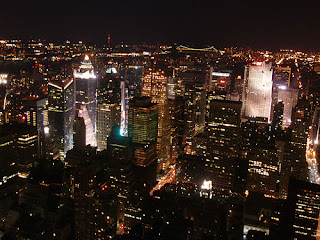 I rarely blog nowadays and the reason for that is twofold- first, there is nothing concrete to say and secondly, life is, in a word, frantic, with work during the week and a fairly hectic social life on the weekend.  The second part is surreal.  A year ago, I gave up my carefree existence to start TTC. I gave up drinking completely, I became a homebody, I completely lost interest in the opposite sex.  After my 2 losses and the move and having to shelve my TTC plans temporarily, I'm suddenly thrust into this 'Sex and the City' lifestyle which is all about having a good time and meeting new people.   Its just a completely different set of priorities. This change actually feels good. It feels weird thinking about giving all up to go to last years way of life,  but there would be no regrets. All of this is fun, but if I had to abandon this to stay home in sweats and watch TV while being pregnant, I would do it without a second thought, and with complete happiness.

Things are changing so rapidly, I feel like Alice in Wonderland, not knowing what will happen next. I think its highly unlikely that I will meet somebody and abandon plan B, but at the same time, I have no idea how the future is going to unfold. I have just a feeling that this year has some tricks up its sleeve- I just hope they are ones that lift me up, not knock me down. But even if they are ones that knock me down, I have to say, what does not kill you only makes you stronger. Despite all my misgivings of whether I will be able to handle another catastrophe in the baby-making department, I know this- I have a far greater reserve of equanimity than when I first started out. I've started realize, and more importantly, accept that I have no power, so when life does not go my way, I  have a better chance at not fighting it and just accept and adjust to whatever comes along. There is nothing else to do.

My antral follicle counts- done twice last year, have been very high, in the 30s. At my appointment with Dr L, I was shocked to see that one ovary had 11 follicles (small decrease), while the other had only 4-5 (huge drop down), giving a total of about 15. My antral follicle count has decreased by half. I was flabbergasted. I don't know what it means.  As you all know, I tend to attribute everything to the change in my vitamin D levels (because that has been the only big change in my physiology). Metformin has been shown to decrease antral counts in women with PCOS,  but that data, as my SD RE put it, is not too good. It would be interesting if vitamin D could do this as well, because both things actually influence sugar metabolism, which is has mysterious, ill understood links to fertility and egg production.

I don't know if my decreased AFC is good for overall egg quality, we shall see. As my next TTC cycle will be completely unmedicated as well, the only thing I have to go on is quality of my natural cycle. This takes into account BBTs, length of luteal phase, number of days with egg white cervical mucus, number of days of high fertility, etc.  Following your fertility signs can tell you a lot about your own cycle- this doctor describes it well here. The problem is though, you are shooting in the dark. The last cycle I conceived in, was, in my own opinion, an absolutely crummy one. I was very concerned about egg quality. Nonetheless, the RE, looking at my uterus and ovaries the day of ovulation, thought things looked good and we proceeded. And it was all good enough to produce an embryo that implanted beautifully and thrived in the first 6 weeks even thought it had a gross chromosomal abnormality. What I would love to know is whether my egg was missing an X chromosome because it was produced in a cycle with less than one day of high fertility before the LH surge began, but I will never know, will I? And even though I understand my cycle far better than the average person, I haven't a hope of figuring out what works and what does not.
Posted by Unknown at 4:32 AM 10 comments: